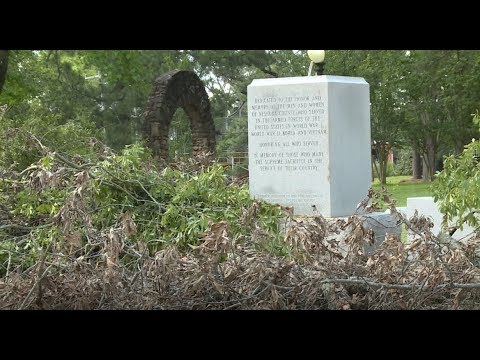 Cleanup efforts are moving forward in Philadelphia as we near the one month anniversary since two tornadoes hit the city and caused widespread damage. Now the Mayor talks about how there’s still work to be done, especially when it comes to getting rid of debris.

Saturday will be one month since the April 18th storm that spun two tornadoes through Neshoba County. Mayor James Young said Philadelphia has recovered 75 to 80% of the way.

“We have about 10 or 12 large trees still yet to move from the street area. We’re trying to find a way to possibly contract that or try to find a machine big enough to do it ourselves. So that’s in the making right now,” said Mayor Young.

Mayor Young said thanks to volunteers and city workers, the community has come pretty far in a short period of time.

“We are truly blessed. The weather is behaving a little bit better now. We have been trying to remove debris, take it to the landfill in the midst of the rain, heavy rains. That has delayed us some,” said Mayor Young.

Young said one of the highly damaged areas, the Dewitt Deweese Memorial Park at the local library, is still in pretty bad shape, like a couple of other areas around town.

“As always we ask the people to be patient during this time. It has been a long time since we had damage of this magnitude and sometimes we all get spoiled, but reality sets in and we’re not going to move it in one day or two weeks, but we have made great progress,” said Mayor Young.

Mayor Young said the city is hoping to qualify for state or federal funds to reimburse some of the cleanup costs.