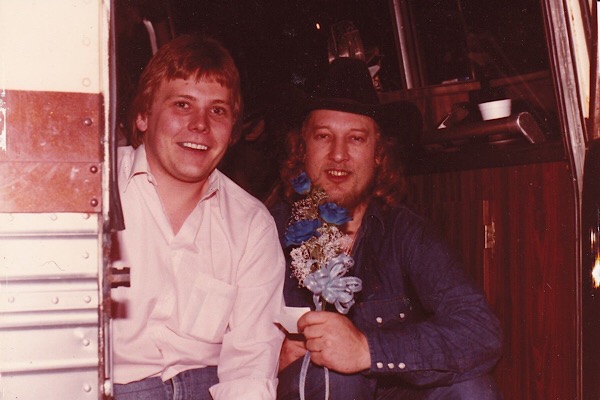 Today is John Anderson’s birthday. Happy Birthday to you! This morning on the Main Event I told a story about John. On a Friday night in late April of 1983, I had been with John for two days. He was in Louisiana where I was in college, doing afternoons on the big country station there, and working as a DJ at a big Honky Tonk called Fools Gold. The night of the concert we had been hanging on the bus. We stepped out and sat on the bus steps and greeted fans. They were bringing flowers and all kinds of gifts to John. All of a sudden his Tour Manager ran up and whispered to us some unforgettable words. “John, on Tuesday “Swingin” is going to be the number one song in the country”. This picture was taken by the Tour Manager right after he gave John the news. The single became the biggest selling record in the history of Warner Bros. Records. In the wake of “Swingin'”, Anderson received five nominations for Country Music Association awards for the year. He was the winner of the Horizon Award, and the song was named Single of the Year; he also received nominations for Song of the Year, Male Vocalist of the Year, and Album of the Year. I have run into John a couple of times since then and he still remembers that afternoon.