East Central Community College has announced members of the 2021 Homecoming Court who were selected during elections held recently on the Decatur campus. The court will be presented and the queen will be announced during halftime of the Warriors’ Homecoming football game against Copiah-Lincoln at 6:30 p.m. Thursday, Oct. 14, in Bailey Stadium on campus. A full schedule of Homecoming events can be found at www.eccc.edu/homecoming. 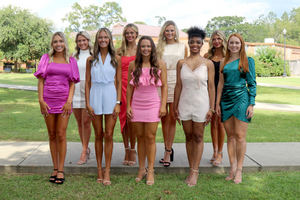