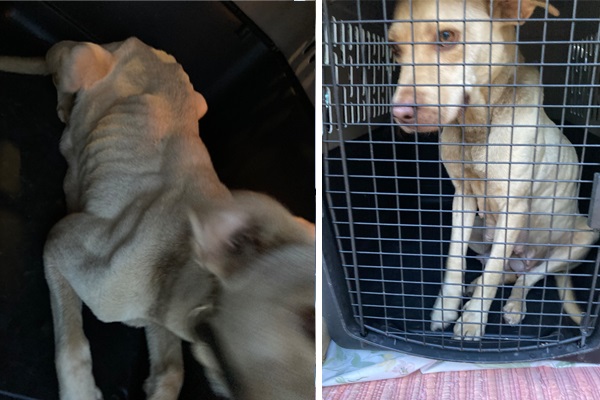 LOUISVILLE, Miss.–A Louisville man will pay a $500 fine and serve two weeks in jail for abusing and neglecting two dogs, said a news release from In Defense of Animals. Stanley Montgomery, of Louisville, got his sentence this week from Winston County Justice Court Judge Mike Fuller.

Montgomery was found guilty of abusing a German Shepherd and a lab/pitbull mix, after two visits from the animal defense group and a Winston County deputy.

On the second visit, in June, the German Shepherd was chained with no collar and had an infected neck from the deep wound caused by the chain. The lap/pitbull mother dog was starved and was trying to keep her pups from nursing.

The dogs were taken by court order. The German Shepherd was named “Winston” in honor of the team that saved him.

Doll Stanley, with In Defense, is fostering Louise, the mother dog.

“Tethering can lead to expensive fines, vet bills, and jail time. Tethered dogs also pose a bite risk for children and adults, which can lead to costly hospital bills and lawsuits. Chaining your dog isn’t worth the risk. Bring your dog inside or give them a shelter and fence. I have served this community for decades and will help anyone untether their animals,” said Stanley.

The Mississippi Dog and Cat Pet Protection Law of 2011 makes it a misdemeanor to “intentionally or with criminal negligence wound, deprive of adequate food, water, or shelter, or carry or confine in a cruel manner, any domesticated dog or cat.” Doing so is punishable with a fine of up to $1,000 and/or up to six months in jail.