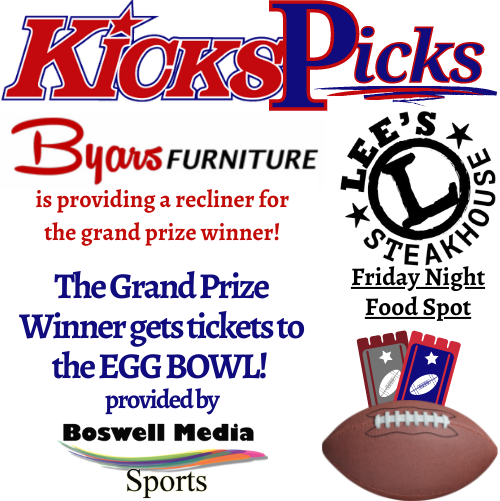 It was a fight to the very end for contestants playing this final week of Kicks Picks presented by Byar’s Furniture of Philadelphia. Several entrants tied for the top this week with 19 correct picks! After using the tie-breaker, the winner is Chris Broyles of Kosciusko.

Congratulations Chris you are the final winner of a $50 gift certificate to Lee’s Steakhouse of Sebastopol!

This season’s GRAND PRIZE WINNER will be announced the near future. This winner will received an Ashley recliner from Byar’s Furniture of Philadelphia as well as tickets to this year’s Eggbowl to see MS State and Ole Miss face off!

Thanks to everyone who has played Kicks Picks this season! I don’t know about y’all, but I’ve had fun.