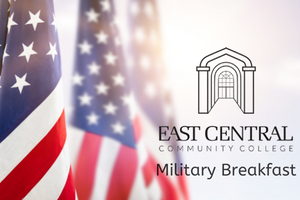 ECCC alumnus Lt. Col. David Alexander of Philadelphia will be the keynote speaker. Alexander was recently promoted to Battalion Commander of the 1-204th Air Defense Artillery of the Mississippi Army National Guard.

The annual event begins with a complimentary breakfast at 7 a.m. in the Gold Room of Mabry Cafeteria. All community veterans and military personnel are invited to attend.

In addition to Alexander’s address, members of the college’s vocal music ensemble Vocé will sing the national anthem and trumpeter LaDarrien Paten of Louisville, a member of the Wall O’ Sound Marching Band, will play Taps.

Posting of the Colors will be conducted by the 1-204th Air Defense Artillery color guard. 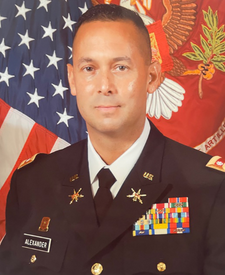 Lt. Col. Alexander began his military career in April 1992 when he enlisted in the Mississippi Army National Guard as a Food Services Specialist in the 4/114th Field Artillery in Decatur. Over the years he has risen in rank to his current full time position as the Deputy G1 for the Mississippi Army National Guard. In August of this year, he was selected to serve as the Battalion Commander of the 1-204th Air Defense Artillery. He mobilized in 2003-2004 and 2008-2009 with the 204th Air Defense Artillery in support of Operation Noble Eagle in Washington, D.C., and again in 2011 in support of Operation New Dawn in Iraq.

He is a 1995 graduate of East Central Community College and graduated from the University of Southern Mississippi in 1997 with a bachelor’s degree in Sports Medicine with an emphasis in Exercise Science.

Lt. Col. Alexander has received numerous awards and decorations throughout his 29 years of service to include the Bronze Star, Meritorious Service Medal, Army Commendation Medal, Army Achievement Medal, Iraq Campaign Medal, and Global War on Terrorism Service Medal, among many others.

He and his family own and operate MilDawg Strength and Conditioning in Philadelphia. The gym is named after his best friend and fellow ECCC alum Millard “Bud” Henley who passed away in June 2010.

Lt. Col. Alexander and his wife, Robin, live in Philadelphia with their three children, Josh, Molli, and Grace.