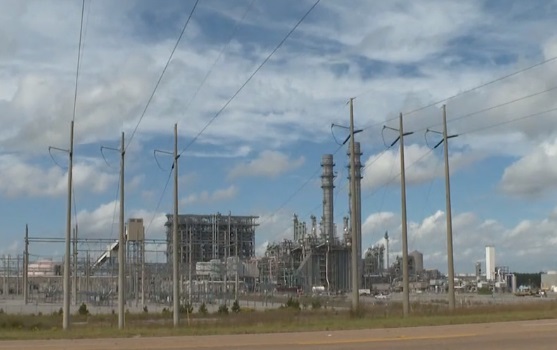 KEMPER COUNTY, Miss.–You might’ve heard the noise about 7:45 Saturday morning. The implosion of part of the steel structure at the Kemper County coal plant, also known as Plant Ratcliffe, could be heard as far away as the Neshoba Co. Fairgrounds. The plant manager says more implosions are likely.

The implosions are local and not likely to affect anyone outside of the plant area, except for the noise.

“The process of removing equipment will go on for some time now. This was just the next step,” said manager Bruce Harrington, talking to our newsgathering partners at WTOK News Center 11. “We’ve had over 70,000 man hours of safe equipment removal and this was just another step in that process.”

The plant was meant to burn lignite coal to generate power when construction began 11 years ago. But, that part was a failure.

The cost of the plant was originally supposed to be under $3 billion, but got much more expensive, eventually topping %7 billion. The Miss. Public Service Commission is only allowing Southern Company and Mississippi Power to collect $1 billion of that from customers.

But, now the part of the plant meant to burn coal is being demolished.

“What it entailed was removing some of the tall structures on the site. What they typically do is use equipment to cut the steel, but when the structure is this tall they can’t reach it. They used some explosives and knocked the building down,” said Harrington. “At no time was any of this unsafe. It was controlled, it was contained and went exactly as it was planned to go. At no time was it unsafe.”

Harrington said the plant now burns natural gas, generating power for about one third of the customers in the 23-county area served by Miss. Power.