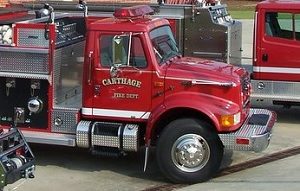 Carthage – A new Fire Chief has been appointed in Carthage, Mississippi. Longtime firefighter Lonzo Jones has been named to the position, according to the office of Mayor Mary Ann Vivians. Lonzo Jones assumes the role after the recent death of Fire Chief Robin Jones. The newly appointed Chief has spent 35 years as a member of the Carthage Fire Department.