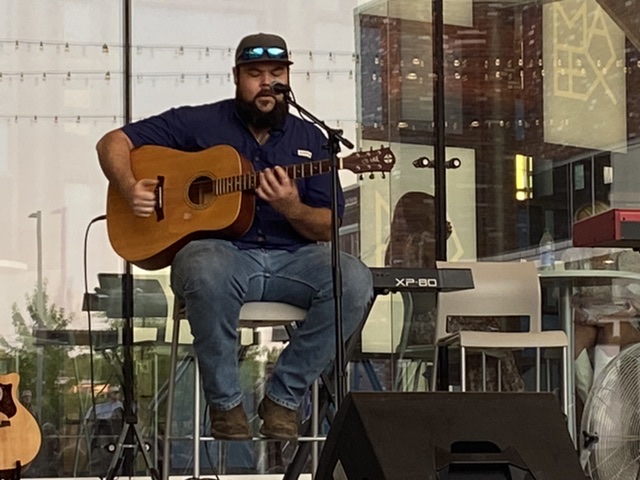 Zechariah Lloyd from Oxford has been named the 2022 Mississippi Songwriter of the Year.

Lloyd was one of fifeteen finalists to perform Saturday night at The MAX in Meridian, where the contest was held.

Lloyd won the 2022 Songwriter of the Year Competition with the song “Down to the River.”

Muscle Shoals musician/historian and local “Shoals” icon Johnny Belew served as a judge for the contest for the fifth year in a row.

Also returning as a judge this year was legendary country music producer Marty Gamblin. A new addition to the judging staff this year was George Cumbest with the Mississippi Songwriters’ Alliance.

As the 2022 Mississippi Songwriter of the Year, Taylor will travel to Muscle Shoals to stay two nights at the Marriott Shoals Hotel & Spa, have HIS/HER song professionally recorded at Wishbone Studios, and enjoy a tour of the famous Fame Studios and Muscle Shoals Sound Studios. NAME will also have a music video shot and produced by the Mississippi State University Department of Communications.

Second place winner, Cole Hill from Purivs, won a recording session at The Governor’s Recording Studio at The MAX.

Third place winner, Candy Lee from Brandon, won an overnight stay at The Riff House AirBnB and a live performance at The Guitar Academy, both located in Kosciusko.

“We are so excited about the partnership between Boswell Media and Muscle Shoals,’ said Boswell Media General Manager Melissa Boswell Townsend. “Bringing this event back to The MAX for the second year in a row was a blast. This event continues to grow each year and we are looking forward to see where next year’s competition goes.”

For more information on the Mississippi Songwriter of the Year, visit MSSongWriterOfTheYear.com.

Songwriter of the Year Winners

COVID-19 cases back on the rise in Mississippi