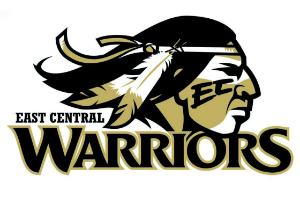 The second longest-tenured football coach in East Central Community College history has announced his retirement effective at the conclusion of the current 2022 season.

Ken Karcher has led the ECCC Warrior football program for the past 10 seasons, twice earning coach of the year honors and winning the first South Division title in school history.

“Ken Karcher is that coach who every mom and dad wants their son to play football for,” said East Central Community College President Dr. Brent Gregory. “He not only is an outstanding football coach, but a man of integrity and a great role model for the hundreds of young men who have come through his program the past decade.”

Karcher will be recognized at the final home football game of the 2022 season Thursday, October 20, against Copiah-Lincoln. The annual Homecoming game kicks off at 6:30 p.m. at Bailey Stadium on the campus in Decatur.

Gregory said the search for Karcher’s replacement would begin immediately following the final game of the season. ECCC will conclude the 2022 season on October 27 at Pearl River in Poplarville.

“Ken Karcher has left his mark on the Warrior football program with everything that has been accomplished on and off the field,” said ECCC Director of Athletics Paul Nixon. “He has built a network of supporters who love East Central football and earned the respect of the other coaches in our conference. That’s what you ask for in a head coach. He not only was our football coach but our friend and a valued member of our campus and local communities. He is leaving big shoes to fill as we move forward.”

Karcher guided the 2015 ECCC football team to an 8-3 record, still the program’s best won-loss record since 1999. The Warriors advanced to the semifinals of the 2015 Mississippi Association of Community and Junior Colleges state playoffs, before losing to eventual state champion Northwest Mississippi Community College 27-20 in Senatobia. It was ECCC’s first appearance in the state playoffs since 2001.

East Central then accepted an invitation to the 2015 C.H.A.M.P.S. Heart of Texas Bowl in Copperas Cove, Texas, where the Warriors defeated the Kilgore College Rangers 35-21. It was the college’s first bowl game since 1996, and only the fourth bowl game since the Warriors began playing football in 1928.

He was named Mississippi Association of Coaches Community College Football Coach of the Year, in both 2015 and 2016.

“East Central and Decatur will always hold a special place in our hearts, and I am grateful for each person who has blessed my life over the last 10 years,” said Karcher. “The memories I will hold close to my heart are about the people I encountered along the way.”

Antonio Gibson, a member of the 2016 and 2017 Warriors, is the starting running back for the National Football League’s Washington Commanders after a standout career at ECCC and the University of Memphis.

Along with a commitment to his players, Karcher worked hard to upgrade the facilities at East Central. In March 2014, Karcher invited longtime friend and retired National Football League Super Bowl Champion Coach Tony Dungy to kick off a fundraising effort for the Warrior football program. “Laying the Foundation: An Evening with Tony Dungy” held at the Neshoba County Coliseum in Philadelphia raised more than $160,000 towards the installation of a new synthetic turf playing surface at Bailey Stadium on campus. Dungy, who led the Indianapolis Colts to a 2007 Super Bowl victory, also visited the East Central campus in Decatur to speak with students and others.

Karcher was announced as ECCC’s 21st head football coach on January 25, 2013, having previously served four years as offensive coordinator and quarterbacks coach at NCAA Division I Eastern Michigan University. Over his 32 years in coaching, Karcher also served six seasons as head football coach at NCAA Division I Liberty University in Lynchburg, Va., and as an assistant at the University of Toledo, at Fellowship Christian High School in Roswell, Ga., for the Rhein Fire (Dusseldorf, Germany) of NFL Europe, at the University of Pittsburgh, for the Orlando Thunder of the World League of American Football, and at North Texas State University.

A native of Pittsburgh, Pa., Karcher was a highly recruited quarterback at Shaler Area High School where he was selected a Parade All-American in 1980. He played college football at both the University of Notre Dame and Tulane University.

He played in the NFL as a member of the Denver Broncos, playing as a replacement player during the 1987 players‘ strike. The Broncos retained him for the rest of the year, and Karcher was a backup to John Elway when the team played in Super Bowl XXII in 1988.

Karcher and his wife, Pauline, have four children, daughters Kelly and Katie and sons Austin and Clay, and six grandchildren.

LA Rebels Football Season Ends in Round 2 of 5A Playoffs