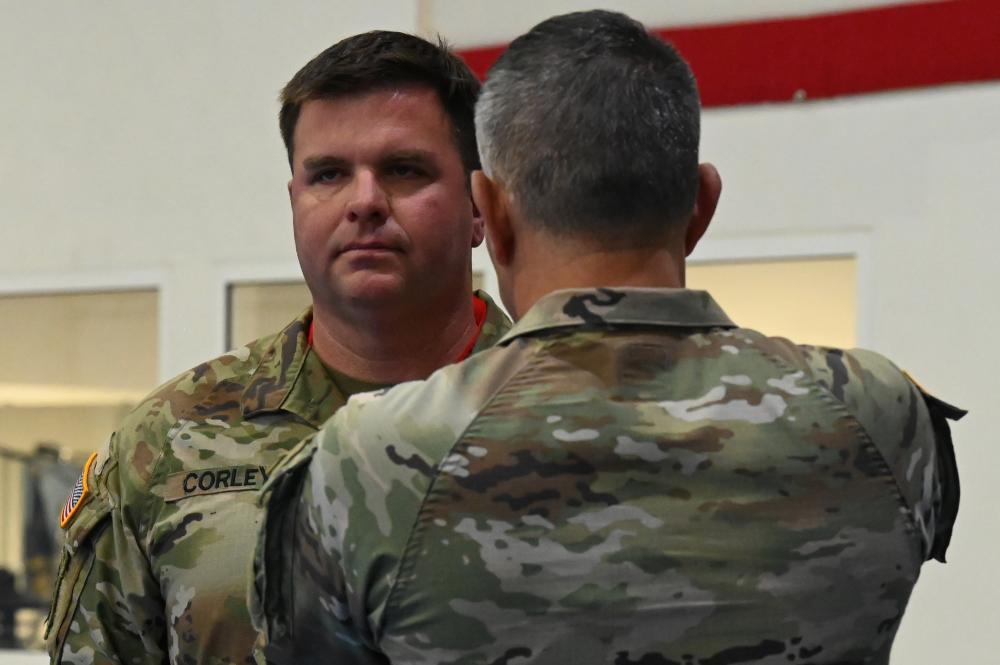 From the Mississippi Army National Guard:

STUTTGART, Germany – In a rare public recognition of U.S. special operations forces in Africa, Master
Sgt. Steven Corley of Brandon, an intelligence noncommissioned officer with 2nd Battalion, 20th Special Forces Group
(Airborne) headquartered in Jackson, was awarded the Purple Heart during a ceremony in Stuttgart, Germany, April 8,
2022.
The Purple Heart medal is one of the U.S. military’s oldest medals dating back to 1782. It recognizes
military members who were wounded or killed in combat.
Corley earned the award in January 2022 while serving as the leader of a six-person team in northwest
Africa where he was responsible for intelligence exploitation and integration with partners and allies. Though
wounded in an attack on base where he was assigned, he assisted partner forces in locating the point from
which his element was attacked.
“Wherever you look in Africa, when it’s somewhere tough or dangerous, SOCAFRICA is there,” said Gen.
Steven Townsend, AFRICOM commander. “Master Sergeant Corley did what U.S. forces typically do when
wounded, stay in the fight until they pass out or are instructed to stand down.”
Corley was medically evacuated the following day and has spent his time since the attack focusing on
physical recovery and staying in the fight from SOCAFRICA headquarters in Stuttgart.

“This has been an amazing rotation in seeing how much the battalion has done for the mission,” said
Corley. “I especially want to thank my family, my battalion, and the staff at Landstuhl [military hospital],
especially the rehab team, for doing an amazing job taking care of me. I’m very fortunate to be here to accept
this medal.”
Special Operations Command Africa engages with partner-force militaries on the African continent daily,
both in person and virtually.
“Master Sgt. Corley’s service and sacrifice are indicative of the great work our teams do across the
continent,” said Rear Adm. Milton J. Sands III, commander of Special Operations Command Africa.
“We have folks in Africa who are in harm’s way to ensure we see threats coming that could threaten our
nation. There are those out in the world who would attack America – Special Operations Command Africa
service members, like Master Sgt. Corley, stands as a sentinel.”
Corley joined the U.S. Army in September 2001, enlisting in 2nd Battalion 20th Special Forces Group
(Airborne), Mississippi Army National Guard. He has deployed in support of Operation Enduring Freedom
six times, including three times to Afghanistan, once to Lebanon, and currently serving his second tour with
Special Operations Task Force – Northwest Africa under Special Operations Command Africa.
Some of his previous awards and decorations include two Bronze Stars, a Meritorious Service Medal,
Joint Service Commendation Medal, six Army Commendation Medals, and the Humanitarian Assistance
Medal for Hurricane Katrina.
–

2 GOP congressmen in Mississippi at risk of defeat in runoff